Before that, I got these e-mails:

I was certain that “Nawir Abu Yasser”, who filed the copyright claims against those two videos, was a pseudonym being used by Wahid Azal. My investigation of the blog used against me led to these screenshots: 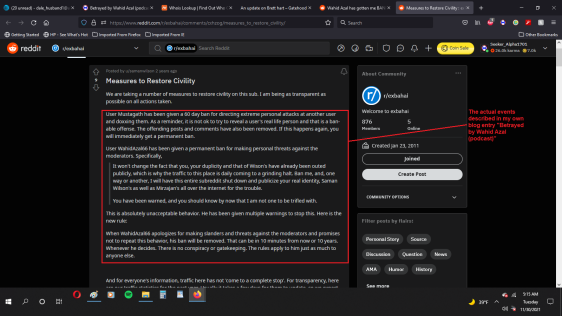 But I wasn’t done. As soon as my YouTube account was restored, I was so determined to face Wahid Azal in a legal battle directly that I filed another counter notification against the one remaining video he had flagged with his OWN NAME to suppress!

Thank you for your counter notification. It has been forwarded to the party that sent the takedown notification.

Keep in mind that by submitting this counter notification, you’ve initiated a formal legal dispute process. As such, YouTube will handle this process in accordance with the law. This process takes some time, so we kindly ask for your patience.

Upon forwarding your counter notification to the claimant, we will allow them 10–14 business days from this date to respond with evidence that they have taken court action against you to prevent the reinstatement of the video(s) in question.

If we receive no response, after that time period your videos will be restored and the associated penalties on your account will be resolved.

You will receive updates in this email thread about your counter notification’s status. You can also check its status within your Video Manager. Though no response is required of you, please respond directly to this message should you choose to provide us with any further information.

The video was a direct collaboration between me and Wahid Azal back when he and I were on friendly terms, before he backstabbed me and the rest of the exBaha’i community in reddit, which he was later expelled from for disruptive conduct. I wrote the questions and he answered them as part of an interview process. By definition, a video that is a product of two or more YouTube users belongs to ALL of them and for one to claim exclusive copyright over the content is an act of FRAUD against the other(s) and against YouTube. Wahid Azal wants to erase any evidence that he and I were friends because his betrayal of me (which I documented in other videos and blog entries) destroys his credibility as a religious leader. He has sent threats, both personal, and legal, against me in an effort to frighten me. Do NOT enable his abuse! https://dalehusband.com/2019/08/17/a-podcast-interview-featuring-myself-and-wahid-azal/

I swear, under penalty of perjury, that I have a good faith belief the material was removed due to a mistake or misidentification of the material to be removed or disabled.

Then I took the copy of the video stored on my computer and uploaded it to my account on Vimeo:

Keep in mind that for over two years, Azal has been demonizing me first as a racist, then as a pedophile and finally as suicidal.

So insulting actual victims of racism, pedophilia, and suicide by calling ME a racist, a pedophile and suicidal is something only a profoundly immature, amoral and TOXIC person would ever do!

Azal has denied that he and I were ever truly friends, since if I was indeed as horrible as he has claimed, how could he and I have been involved with each other? That podcast featuring both of us proves him to be a liar, full stop!

Azal has painted himself into a corner he cannot get out of and the only way he can retain any credibility he might have had (not that he ever had much, really) is to completely suppress all the evidence of his dealings with me in a friendly manner. But as long as I live and have access to my computer files and the internet anywhere, he cannot succeed!

My guess is that as both himself and “Nawir Abu Yasser” he tried to get me banned quickly from YouTube by flagging three of my videos for copyright infringement. YouTube must have been suspicious of what was happening from the start, because those initial attempts only got me two copyright strikes, not three that was needed to shut down my account. As a result, I had time to issue counter notifications on two of the three videos attacked and also took YouTube’s “Copyright School” that would allow the copyright strikes against me to be removed in a few months. So in desperation, Azal flagged one more video, my podcast interview with him! But since that video clearly belongs to me too, Azal has legally sealed his fate!

My ultimate goal is at least one of two things:

Update:  Wahid Azal issued another phony copyright claim against the copy of the podcast he and I made together that I uploaded on Vimeo, also getting it taken down. He also made some interesting assertions in comments he tried to place on my blog.

But the reality, as revealed by screenshots of a conversation between him and me via Facebook Messenger in 2019, destroy completely his claims against me once and for all!