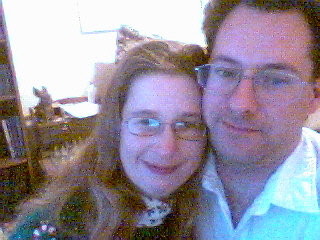 Cheri and me as newlyweds.

I was in my mid-thirties and had been looking for someone to love since I left high school.

Then I met a beautiful lady named Sara. She seemed to have a wonderful personality, but even after I made clear how attracted I was to her, she said she saw me as just a friend.
Anyway, I had a choice to make. Walk away from her, or remain and be her real friend. I chose the latter. At one point, I even helped her get a job at a Target in Arlington, Texas. Where a certain woman was already working.
Sara then met a guy named John Ellington. The moment I saw them together, I knew she had found the right man for her. A year later, I get invited to their wedding. Guess who was also invited?
Cheri Day, my own future wife and Sara’s co-worker at Target. Cheri actually sat near me. I danced with Cheri at the wedding and we swapped addresses and phone numbers and we began dating. We often double dated with Sara and John.

Then the following year, Cheri and I were married at the same place Sara and John were married at. Everything seemed to be going well…..until a few months after we moved out of my parents’ house and into our own apartment. That’s when I began to see issues with her that caused friction.

I already knew about her health and mental problems. She has only one good lung, a badly deformed heart that requires a pacemaker to beat, and sub-normal IQ resulting from brain damage at birth that basically gives her the mind of an average ten to twelve year old. I could deal with that. What really troubled me was her demanding attitude and her total lack of respect for others. She wanted the marriage to revolve only around her.
She even made racial slurs like calling Barack Obama “that nigger President”. She, and the rest of her family, are hard-core Republicans. Cheri always wanted us to attend family gatherings, which were EVERY SINGLE MONTH. But I’m an introvert. My liberal views and my lack of social skills made me totally uncomfortable at such events.
The rift between her and me really started when she invited another couple to start spending weekends at our apartment. They did this for months…..but they did not really get along and often argued in front of us. And then one evening I actually saw Cheri KISS the other guy! Shortly after that the other couple stopped coming around and they broke up completely. Anyway, the guy Cheri had kissed was named Carlo Crook. Appropriate name, eh?
After that, Cheri and I began to fight more often. I actually walked out on her several times, but would later return. We tried counseling, and reading self-help books by people like Dr. Phil to find solutions.

Cheri and I lived in two different apartments in Arlington, Texas because she was never satisfied with either one. In 2011, she began demanding we move to a third place. I also noticed that she had Carlo on her phone’s speed dial.
Then in mid-December, the bottom fell out of our marriage. Cheri had been dumb enough to leave her web browser on her computer open. When I looked at it, I saw that she had been swapping messages with Carlo. They were actually talking about sex and being committed to each other! So I made screenshots of the damning evidence and emailed them to myself….and also to my mother-in-law.
It was awkward as hell trying to keep quiet about what I had discovered through the Christmas parties Cheri and I attended later. But I finally told her what I knew on Christmas Eve and said it was over. And the day after Christmas Day I left her for good.
In February 2012, I got a cell phone bill for a whopping $283, when the normal amount was only $60 a month! I investigated and found out most of that cost came from Cheri spending many hours on the phone in November and December of 2011 with Carlo while I was away at work! Naturally, I cancelled that account and made a new one with her not on it.
I filed for divorce on May 7, got it finalized in August 15 and moved on. Well, I did.
But she never has. She spent months cyberstalking me on Facebook, forcing me to block her. And to this day she attends my UU church, First Jefferson. If this was a man stalking a woman, that man would have been tossed out of the church years ago!
Thank God Cheri and I never had a baby. She actually had a hysterectomy in her 20s because she was considered too unhealthy to carry a pregnancy. Even if she’d not undergone that, she was clearly never fit to be a mother! Or a wife, for that matter!