It was established in 1801 by Federalist and Founding Father Alexander Hamilton and became a respected broadsheet in the 19th century under the name New York Evening Post. In 1976, Rupert Murdoch bought the Post for US$30.5 million.[4] Since 1993, the Post has been owned by News Corporation and its successor, News Corp, which had owned it previously from 1976 to 1988. Its distribution ranked 4th in the US in 2019.[5]

Keep in mind that this tabloid is thus owned by the same company that owns FOX News, which is notorious for its obvious right-wing biases. And yet it seems that even they are becoming fed up with extremism among Republicans in the wake of Donald Trump about to leave the Presidency. 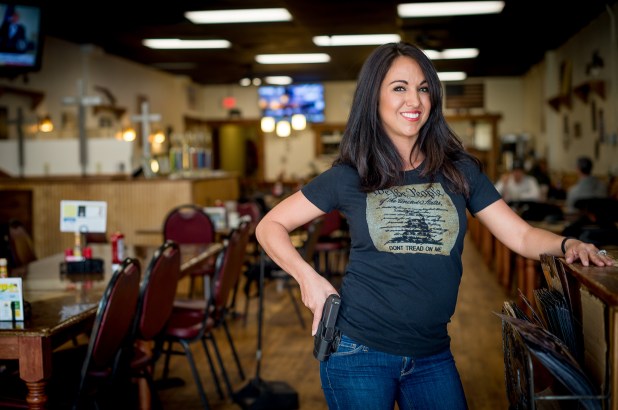 Rep. Lauren Boebert, the gun-toting freshman Republican Colorado congresswoman who ran on a law-and-order platform, has had several dust-ups with police, starting as a teenager.

The 34-year-old lawmaker, who beat her district’s very conservative Rep. Scott Tipton in a primary upset last June, has a rap sheet unusually long for a member of Congress.

And her track record of thumbing her nose at law continued this week after she tussled with Capitol Police officers over her refusal to walk through newly installed House metal detectors.

“I am legally permitted to carry my firearm in Washington, DC, and within the Capitol complex,” she tweeted in defiance, while calling the detectors “another political stunt by Speaker Pelosi.”

While the lawmaker was eventually allowed to enter the House chambers, she is facing growing questions about her role in assisting the deadly riot on Capitol Hill Jan. 6. Just hours before the violence, she tweeted, “today is 1776.” In the days leading up to the unrest, Boebert made a spectacle of her intention to remain armed in the Capitol, earning another rebuke from local law enforcement.

Back in June 2015, Boebert was cuffed for disorderly conduct at a Country Music festival near Grand Junction, Colo., after police said she attempted to interfere in the arrest of minors busted for underage drinking and encouraged the accused to run off. Boebert said the revelers had not been read their Miranda Rights and that the arrest was illegal.

“Lauren continued yelling and causing the underage drinkers to become unruly,” an arresting officer said in a statement at the time. “Lauren said multiple times that she had friends at Fox News and that the illegal arrest would be national news.” At the time, Boebert was running Shooters Grill in Rifle, Colo. The story was first reported by Colorado Newsline.

Boebert subsequently missed two court appearances and was arrested again in December 2015. The charge was dismissed.

A year later, in September 2016, Boebert was charged with careless driving and operating an unsafe vehicle after rolling her truck into a ditch, police said. When she failed to show up for court a month later, a warrant was issued for her arrest. She was booked on Feb. 13, 2017. She ultimately pled guilty to the unsafe vehicle charge and paid $123.50 in fines and court costs. The careless driving charge was dismissed. The incident was first surfaced by the Colorado Times Recorder.

“It’s certainly of concern that on a couple of occasions she apparently failed to appear for court,” Tom Silverman, a Democrat and former president of Colorado Municipal Judges Association, told The Post. “I was disappointed when she was elected.”

Colin Wilhelm, a Colorado defense attorney and Democrat who plans to challenge Boebert in 2022, agreed: “It’s concerning when you claim to be a member of ‘back the blue’ and yet are so anti-authority when they are trying to do their job.”

In September 2010, Boebert was arrested after a neighbor, Michele Soet, accused Boebert’s two pit bulls of attacking Soet’s dog. Soet’s dog narrowly escaped injury after jumping into a van. The future legislator pled guilty to a single count of “dog at large,” paying a $75 fine.

Boebert’s future husband Jayson also had brushes with law enforcement. In January 2004 he was arrested after allegedly exposing his penis to two women at a bowling alley, according to an arrest affidavit. Lauren Boebert (then aged 17 and known as Lauren Opal Roberts) was also there. Jayson Boebert pled guilty to public indecency and lewd exposure, earning himself four days in jail and two years probation.

In February 2004, he was booked on a domestic violence charge, against Lauren Boebert. He “did unlawfully strike, shove or kick … and subjected her to physical contact,” a spokesman for the Garfield Associate County Court clerk told The Post. They had been dating at the time.

Lauren Boebert took her revenge in May 2004 during an altercation with Jayson at his home in which she scratched his face and chest and trashed his residence, according to a police report. She was slapped with third-degree assault, criminal mischief and underage drinking charges. A rep for the Garfield County Combined Court said they could not reveal any information about the case’s final disposition.

The Boeberts married in 2005, and have four children.

Jayson Boebert did not respond to a request for comment from The Post. In a statement, Rep. Boebert’s chief of staff Jeff Small called the arrests “a retread of a failed personal attack by the Democrats from the last campaign.”

“Attacking her family, trying to criminalize a $100 traffic fine or a dismissed case, and vilifying ordinary business transactions is exactly what people hate about politics.” he said.

Why the hell is such a hypocritical lunatic in Congress?!

This is what the Republican Party has totally degenerated into because of Donald Trump rising to become its leader! Biden replacing him as President is clearly not enough; we must oppose and defeat right-wing extremism in Congress too! Rep. Boebert and others like her must be voted out in 2022!

2 thoughts on “The New York Post vs. a Right-wing Extremist in Congress”