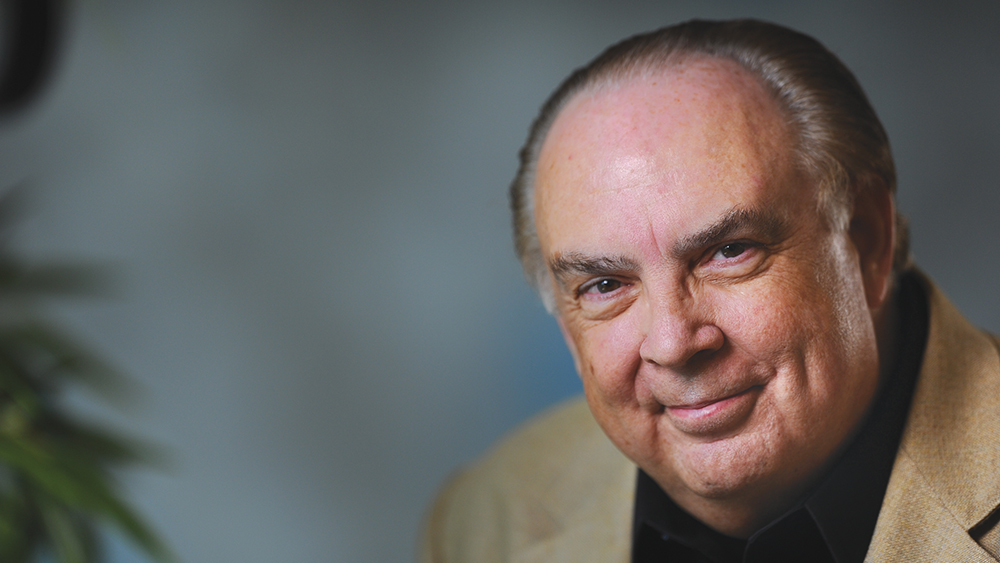 After his years of faithful service, Dr. Morris, known affectionately around the office as Dr. Henry, was planning to retire from his ICR leadership position at the end of this month. A tribute article about him was included in the December issue of Acts & Facts.

We’d like to share some excerpts from that article as we reflect on what Dr. Henry has meant to ICR’s ministry and to so many people who have been touched by his life and influence over the years.

Dr. Henry M. Morris III has been at the heart of ICR’s ministry work for decades, using his gifts as a leader, speaker, and writer to proclaim the truth of God’s Word and how science affirms creation. Some might say a passion for creation ministry has run in his family. His father, Dr. Henry M. Morris—widely known as the father of modern creationism—founded ICR in 1970, and his brother Dr. John Morris served as ICR President from 1996 to 2014 and as President Emeritus after that.

Here’s the thing to remember: The Morris family claimed to be scientists, researching evidence for creationism, but that is fraudulent; genuine scientists never make assumptions about reality and twist the results of their work to fit the assumptions. But that’s what Creationists have always done, because they are motivated by dogma, not objective truth.

Dr. Henry joined ICR in 2000 as Executive Vice President for Strategic Ministries. In 2004, he and his wife, Jan, moved to the Dallas area to prepare for the relocation of ICR from Santee, California, to that more central region of the United States. Once they found a place to live, their home functioned as a hub of the Texas “branch” for about two years, with the Dallas staff working from their living room until an office building could be located.

And why would the ICR move from one state to another? Most likely for political reasons. California is a “blue” (liberal Democratic) state while Texas is a “red” (conservative Republican) state, so perhaps Morris hoped to get more political support from the people and even the state government in Texas. Another Creationist group, Answers in Genesis, is also headquartered in a red state, Kentucky.

Between 2007 and 2010, Dr. Henry worked to establish a new generation of creation scientists who would be eager to uncover new evidence for biblical creation. The most important criteria he looked for were an unwavering commitment to Scripture and strong technical training in a scientific field.

Quite simply, you cannot uncover evidence that doesn’t exist. And the point of having training in science is to be able to write propaganda in “scientific” sounding language to deceive Christian readers who are themselves scientifically illiterate.

He was also instrumental in the push to create a DVD series churches could use to introduce their members to creation truth without the time and expense of bringing in an ICR speaker. He said, “I became convinced that we needed to do something that would offer the smaller churches a quality educational resource without the expense of funding a seminar. That generated the idea of having a collection of these short, 20-minute, movie-quality episodes.”

This is actually a damning indication of how far Creationism has fallen since its heyday decades ago. Plus not having a speaker means people can’t ask them critical questions about their claims and dogmas.

As a passionate and engaging speaker, Dr. Henry often joined the ICR science team at creation seminars and conferences. He communicated the importance of the authority and accuracy of God’s Word and exhorted Christian believers not to compromise but to uphold Genesis as a true account of our beginnings.

Again, in real science, the authority and accuracy of ANYTHING besides the scientific research itself should never be an issue. Mere stories that were popular in the past don’t matter.

But Dr. Henry’s biggest undertaking was the ICR Discovery Center for Science & Earth History. It took years for this vision of a creation-based Dallas museum to come to pass as ICR encountered various obstacles along the way.

He was intimately involved in the plans and decisions to ensure that the Discovery Center reflected ICR’s commitment to solid science and the ultimate authority of Scripture. It was his hope and expectation that the Discovery Center would equip Christian believers with the scientific evidence that confirms biblical creation and refutes evolution. He wanted the new facility to build visitors’ confidence in the Bible, as well as serve as a training ground for Christian pastors and educators. He had a heart to reach homeschool families and other students ranging from elementary through college.

Since the Discovery Center’s grand opening in 2019, thousands of visitors have already come to explore the wonders of God’s creation and gain confidence in the veracity of His Word. Dr. Henry said, “It’s been an absolute delight and joy to see it birthed from a scrawling idea on the back of a lunch napkin to something that is really significant.”

Answers in Genesis’ Creation Museum was established in 2007, so why would the ICR found their own museum 12 years later? Not to mention yet another Creationist museum also in Texas that has existed for decades before the museum in Kentucky. Oh, wait…..

Young Earth creationist organizations such as Answers in Genesis and Creation Ministries International have criticized Baugh’s claims saying he “muddied the water for many Christians … People are being misled.”[1] Don Batten, of Creation Ministries International wrote: “Some Christians will try to use Baugh’s ‘evidences’ in witnessing and get ‘shot down’ by someone who is scientifically literate. The ones witnessed to will thereafter be wary of all creation evidences and even more inclined to dismiss Christians as nut cases not worth listening to.”[37] Answers in Genesis lists the “Paluxy tracks” as arguments “we think creationists should NOT use” [emphasis in original].[38] The old Earth creationist organization Answers In Creation also reviewed Baugh’s museum and concluded “the main artifacts they claim show a young earth reveal that they are deceptions, and in many cases, not even clever ones.”[39]

The “Burdick track” and “fossilized finger” were featured on the controversial NBC program The Mysterious Origins of Man, aired in 1996 and hosted by Charlton Heston.[16] Creationist Ken Ham criticized the production in the February 1996 Answers in Genesis newsletter in a review titled “Hollywood’s ‘Moses’ Undermines Genesis.”[40] Ham attacked Baugh’s claims, saying, “According to leading creationist researchers, this evidence is open to much debate and needs much more intensive research. One wonders how much of the information in the program can really be trusted!”[40]

It’s almost like playing  a game of whack-a-mole; you debunk one phony museum’s exhibits and another museum arises to try to make a more credible presentation of Creationist claims instead of reaching the obvious conclusion that CREATIONISM ITSELF IS A LIE!

Then there are these web pages:

Keep in mind that in most cases, these arguments were seriously used by Creationists in the past. The reason they are denied now is because real scientists have torn down those arguments with the objective TRUTH, which even Christians can easily find through the internet. Hence the damage control I just listed.

I myself have written many blog entries debunking Creationist nonsense:

The Planets Won’t Cooperate, with CREATIONISM!

How to be a good Creationist

The bottleneck effect and the Genesis creation myth

Creation Museum Running Out of Cash and Going Extinct?

But since Christian Creationism is ultimately based on the claim of the infallibility of the Bible, we really need to strike at that dogma itself, even without referring to evolution or other scientific issues.

Lying About History for the Bible

Lying About History for the Bible, Round 2

The prophet Isaiah did NOT predict the coming of Jesus!

Creationists are frauds, period and we need to keep discrediting them until they are gone from society.