In 2018, I downloaded and began playing an app on my new smartphone titled Choices: Stories You Play created by a mobile gaming company called Pixelberry Studios. It features stories of romance that you have some control over by making decisions on behalf of the stories’ Main Characters. The characters include teenagers in high school, young adults in college, older adults dealing with mysteries and fighting criminals and other powerful enemies, and even some historical scenarios.

Of all the stories I have played so far, my favorite by far has been Perfect Match.

Nathan Park, the main character. Though his name and appearance are variable, this is the version of him I always favored.

Hayden Young, Nathan’s girlfriend, who was matched with him via a dating service called Eros. We later learn shocking things about both her and Eros that drive the story into a tense drama. Though her appearance may vary, this is the version of her I always favored. She is truly one of the most beautiful characters I’ve ever seen.

Nadia Park, Nathan’s cousin who used Eros first and recommended it to Nathan. She often comes across as impulsive and even silly at times, but her loyalty to the group and their causes are limitless.

Steve Tennyson, Nadia’s boyfriend. His sudden disappearance breaks Nadia’s heart and the search for him and later Hayden as well are major plot points.

Damien Nazario, Nathan’s best friend who is a private investigator. He helps Nathan and Nadia look for Steve and Hayden after they disappear.

Cecile Contreras, in charge of matchmaking at Eros. She later becomes a dangerous enemy. 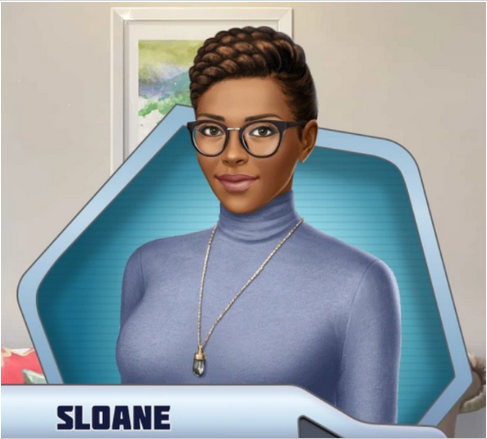 Sloan Washington, Hayden’s roommate. She is a brilliant scientist who is socially awkward. In some versions of the story, she is a rival for the main character’s affections.

Alana Kusuma, a former partner of Damien (in more ways than one). Because of her past history, he distrusts her but recognizes she can still be helpful to the group. Her loyalty is always questionable.

Rowan West, the CEO of Eros, and thus Cecile’s boss. His goal is to use his creations to take over the world and lead humanity to a new age.

The story is surprisingly deep and philosophical and I actually recommend it to young Unitarian Universalists wanting to see actual examples of the first UU Principle: the inherit worth and dignity of all people.

Not everything about Choices is perfect, but from what I have seen, it is far superior to all other storytelling apps out there. Get it if you want quality entertainment, but be careful not to spend too much money on it. Thankfully, the app lets you try the first chapter of any story without charge, and you get free keys (which allow you to play chapters past the first one) and diamonds (which can unlock content you otherwise cannot access), if you allow ads or are willing to replay stories to collect diamonds.