This is a direct sequel to Corruption and Betrayal in a WoW Guild.

In 2012, I and Stormchick started the guild Stormchasers in World of Warcraft. Then the following year, Stormchick’s owner left the game and turned the guild over to me as Bichorak. I worked very hard over several years to build it up until it had hundreds of characters and had gained many guild achievements. One of the members that joined it later was named Rolltowin, a monk. He also worked very hard to help me and the others, so I generously rewarded him with promotions, until finally he was a high-ranking officer second only to me in authority over the guild. But it seems that was not enough for him. Not content to offer me helpful advice and suggestions to improve the guild, he often issued harsh personal criticism of my leadership decisions. Over time, these attacks eroded my self-confidence, and also by the fall of 2015 my work schedule was actually hindering my ability to manage the guild properly. Of course, the guild HAD grown too big for one person to handle, hence my appointing officers like Rolltowin and several others. I finally decided I needed a break from handling the guild so much, so I agreed to make Rolltowin the new guild master. I instead became HIS second in command.

Later, I quit the real life job I had been doing, but because things seemed to be going smoothly with the guild under Rolltowin’s leadership, I was content to leave him in charge. But everyone still knew I was a co-founder and earlier leader of the guild. Rolltowin seemed to resent that, because he continued to criticize me on many occasions whenever I did something he did not like, claiming I was breaking guild rules and abusing my power. But in fact he often did not clarify rules when he made them and so I was caught off guard when I did things the way I was used to doing them when I was guild leader. It was very frustrating!

Things came to a head on August 30 of this year, the same day the new WoW expansion Legion was launched. Nerevar, another officer of Stormchasers, abruptly left the guild saying he wanted to join some friends in another guild. Rolltowin was not online at the time, but I was, so in his absence, I did two things I thought would be done normally:

I assumed that if Rolltowin did not agree with my actions, he would simply countermand them later and tell us to wait. Instead, when he came online later he actually DEMOTED me from my officer status and made an issue of that in open guild chat, much to my shock and anger. He did allow the officer election to go forward, however.

It was incomprehensible to me that I as a co-founder and former guild master would be treated so badly by someone I considered a friend and loyal to the guild. After a final discussion with Rolltowin in which he stated that my demotion might be only temporary, but refused to clarify under what conditions I would regain my officer status, I concluded that he actually had no intention whatsoever of restoring that status and really wanted me out of the guild completely. So on September 14, I left Stormchasers and pulled all my alts from it too.Then I, along with others from Stormchasers and some strangers, formed a new guild, originally named Freedom Raiders but now titled Guardians of Lore.

After another member of Stormchasers moved from that guild to my new one, Rolltowin attacked me over it. I then put him on ignore. 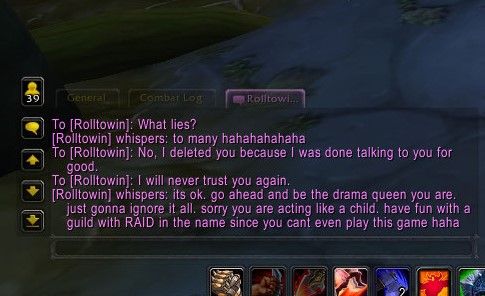 A couple of nights later, Rolltowin denounced me in my former guild, proving he was NOT ignoring me at all and was out to ruin me.

I admit that I am far from perfect and have made some mistakes, but it seems to me the biggest mistake I ever made was listening to Rolltowin so much and allowing him to take over Stormchasers. From now on, I will never allow someone to take over a guild of mine unless I know I am leaving WoW completely, just as Stormchick did for me. I was naive and was taken advantage of and now I know better! If people do not like my leadership, they can just leave and form their own guild! I have done that twice so far in my WoW career and it is not as hard as it might seem at first glace.

4 thoughts on “History repeats itself in World of Warcraft”