You are an Azari, a native of the planet Azar. Your people have developed a global civilization with technology comparable to that of mid 20th Century humans on Earth. One day, dozens of alien spaceships appear in the skies above your world and then land, disgorging thousands of alien troops and tens of thousands of alien settlers. The aliens tell you they are Marlos and they claim to OWN your world, having bought it from their neighbors the Carlics a few years earlier. You remember having contact with the Carlics a century ago and even trading with them, but you had no idea they claimed to own your world, let alone that they had “sold” it to another interstellar power. So you reject the Marlos’ claim and attempt to repel the invaders.  But the Marlos use their superior technology to quickly defeat you! Most of your people are exterminated and the few survivors are forced into concentration camps of poor land where they can only survive by farming, while the Marlos take over the richest land and nearly all the resources of the world your people evolved on! Your civilization, which could have become an interstellar power in its own right in a few thousand years, is instead broken forever.

You are probably thinking that the Marlos are evil to have conquered Azar, and are comparing them to the Nazis of Germany.  But if you are a white American living in the midwest of the USA, you are just as bad, because you and your ancestors are the beneficiaries of decades of theft and genocide against the iconic “plains Indians” featured in so many Western movies and TV shows over the past century.

On April 30, 1803 the nation of France sold 828,000 square miles (2,144,510 square km) of land west of the Mississippi River to the young United States of America in a treaty commonly known as the Louisiana Purchase. President Thomas Jefferson, in one of his greatest achievements, more than doubled the size of the United States at a time when the young nation’s population growth was beginning to quicken.

The Louisiana Purchase was an incredible deal for the United States, the final cost totaling less than five cents per acre at $15 million (about $283 million in today’s dollars). France’s land was mainly unexplored wilderness, and so the fertile soils and other valuable natural resources we know are present today might not have been factored in the relatively low cost at the time.The Louisiana Purchase stretched from the Mississippi River to the beginning of the Rocky Mountains. Official boundaries were not determined, except that the eastern border ran from the source of the Mississippi River north to the 31 degrees north.

This is the land we are talking about: 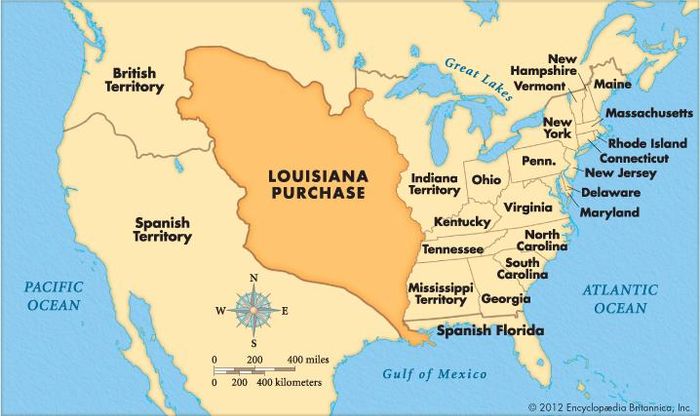 Note that this was a deal made between two white leaders, Thomas Jefferson (himself a slaveowner and rapist of at least one of his slaves) and Napoleon (a military dictator who would later wage war on a massive scale across Europe, just as Adolph Hitler would over a century later). The various Native American tribes who lived in the vast regions north of New Orleans were never consulted about the purchase and would most likely not have agreed to it had they been informed of it. What the hell was France doing even claiming so much land to begin with???

So when people talk about freedom, justice, and human rights as basic American values, I am tempted to die laughing. We have always been damned hypocrites!

7 thoughts on “The Louisiana “Purchase””