Once again, I find myself dealing with the tiresome issue of the competing definitions of Atheism. See my previous blog entries on this subject for references:

Now I learn that Aron-Ra, a fellow Texan and activist against promoting Creationist bigotry and lies in public schools, has not only accepted the “contemporary” definition of atheism, he asserts that the “classical” definition of it was a lie all along! Really???

Some excerpts from those blog entries in red, along with my direct responses to them by me in blue:

Most atheists don’t even know they are atheist. They’ve been lied to about what the word ‘atheist’ means, as if it means a conclusion of certain knowledge of the non-existence of God. Sorry no, that is not what ‘atheist’ means. But this lie so often repeated, it has caused even the best atheists to reject that label. Carl Sagan and Neil deGrasse Tyson are two of best models of atheism anyone could point to, but neither of them would use that word to describe themselves.

Sagan said that he is not an atheist, because [he thought] “An atheist knows there is no god. An atheist knows a lot more than I do. By some definitions, atheism is stupid”. He’s right; by that WRONG definition –a deliberate misrepresentation constantly repeated- atheism would be stupid. But that is not what atheism means. (Emphasis mine)

This assertion can only be justified if Aron-Ra could establish via evidence of some kind that the people who were defining atheism as the dogmatic denial of the existence of all gods were indeed lying willfully to others. But when you read the entire blog entry of his, you indeed find NO such evidence. Thus, he is merely asserting his OPINION. Opinions are not facts and indeed need not be based on facts at all. Such seems to be the case here. What are you doing when you assert your opinions as if they are somehow facts beyond dispute?  You are actually being DOGMATIC!

A-theism means ‘without theism’. It is not necessarily a claim of knowledge or even a conclusion. It is simply any perspective that does not include or accept the beliefs held in theism.

I have already pointed out that in the past the term “non-theism” was actually used for just that purpose. By contrast, Atheism DID mean the outright denial of all gods. So in essence Aron-Ra is making non-theism a useless term.

It is the default position regarding the failure of theists to make an adequate or compelling case for their unsupported and evidently false assertions.

I have already addressed that claim as well:  There is NO default position in religion

I do, however, agree that most religious advocates have utterly failed to make a credible case for their beliefs. But that is not the issue here.

I actually see atheists on the internet all the time who do assert “There is no god”, not merely, “I have no belief in a god.”  Sorry, Aron-Ra……

Also, can he show documentation of where theists have tried to shift the burden of proof onto atheists? I have read lots of writings in which Christian apologists do attempt (via prejudicial and fallacious arguments, to be sure) to provide a POSITIVE case for Christianity.  But a case AGAINST atheism?  There can be no such thing. It is obvious that you cannot prove a negative. But what you CAN do, and what too many atheists have done, is to assert that there is no god without proof, just because theists have failed to prove THEIR case.

No wonder they want to redefine atheism!

And then the irony meter begins to overload. Aron-Ra includes two quotations:

Go back and read again where I noted that Aron-Ra failed to provide evidence for anyone lying about how to define atheism.

These atheists who don’t know they’re atheist often call themselves ‘agnostic’ instead -because they don’t know what the word, ‘agnostic’ means either. They think you either believe in God or you believe in no-gods, or you can play the agnostic card if you just want to avoid the question altogether, because that’s what that amounts to.

Wrong! The term “agnostic” was coined by Thomas Huxley for the purpose of clarifying his actual position regarding theism, as I explained in earlier blog entries. He was not dogmatic about his non-theism, and he assumed (and Aron-Ra would say he’d been lied to, no doubt) that the only true atheists were the ones who WERE dogmatic about their non-theism and he OPPOSED that just as much as he opposed religion. Granted, non-theist agnostics do have much more in common in their thinking with atheists than with most religious people, but that does not mean we can simply lump atheists and agnostics together all the time. Ironically, that is exactly what religious bigots do. Like it or not, agnosticism as a rejection of dogmatic atheism is a position many people have taken over the centuries and denying its validity doesn’t mean much to me. And I will repeat for the record that having coined the term agnostic, Huxley never referred to anyone as an “agnostic atheist”, an “agnostic theist”, a “gnostic atheist”, or a “gnostic theist”. Those term combinations were never even seen until the present generation, yet now they seem to be everywhere. Why?

If you don’t believe in God, you’re atheist. Sorry. It doesn’t matter what other label you want to paste over that, agnostic, secular humanist, apatheist, pantheist, whatever. The only way to dodge the definition of being “without theism” is to be WITH theism.  There is just no “well maybe kinda sorta not really” wishy-washy undecided ambiguity anyone can possibly wedge into that.  There just isn’t. Accept it.

Scroll up and read the quote that assertions without evidence may be dismissed.

If we were talking about any topic other than God, this conversation would be over with in the first sentence, and all the hesitation and excuses would have been too absurd to even bring up.

And this is exactly where Aron-Ra’s biggest weakness in his case appears. Let me offer some terms for consideration:

So, have you ever heard of an:

Then why the hell do we have  a term like ATHEIST?!

If indeed we were consistent in the use of terms regarding beliefs, we would actually be discarding the term “atheist” and adopting “non-theist” for people who lack belief in any god. But so many people are so desperate to make the word atheist respectable and popular that they would rather do the opposite, even in defiance of centuries of historical precedent.

When I confronted Aron-Ra about his claims on Facebook, he said this to me: 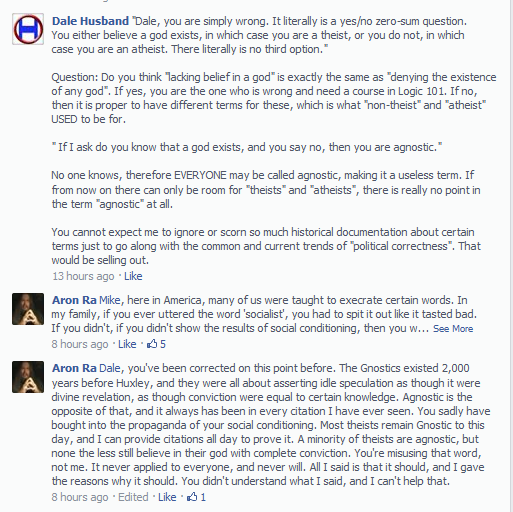 Which just gives me more bogus arguments to chew up.

First, you do not “correct” anyone merely by contradicting him. That is all Aron-Ra ever did to me. He, I, and several others merely gave their OPINIONS on Facebook. The only way you can correct someone who is wrong is to conclusively disprove his claims with EMPIRICAL EVIDENCE.

Second, the Gnostics were a Christian sect that was quite popular in the Roman Empire, but ultimately were defeated by the “orthodox” Christians. There is no evidence that Huxley was even thinking about that particular sect when he coined the term agnostic.

Third, nearly ALL religions are about “asserting idle speculation as though it were divine revelation, as though conviction were equal to certain knowledge”. There was nothing special about Gnostics in that regard. They were being dogmatic, quite simply.

Fourth, as for my social conditioning, I see no reason to deny that. We are ALL a product of social conditioning in one form or another. But the equally strong social conditioning of many atheists to keep using the term “atheist” instead of the less popular and well known term “non-theist” is also to be considered. Scroll up to read again why this is a problem for me.

Fifth, how the hell could anyone believe in God with “complete conviction” and also be “agnostic” about theism? And that is where Aron-Ra lost me.

Right, I do not understand what he said, because it makes no sense to me. He and others like him will make better sense when they toss out the term atheist and replace it with the more proper term non-theist.

I am a non-theist and am agnostic about that. I am perfectly content to call myself agnostic by itself, because my professed ignorance about the matter is more important to me than not believing in a god.