CNN published an article on its website about climate change. Two bloggers with a strong interest in the subject looked at it and quickly debunked its credibility. 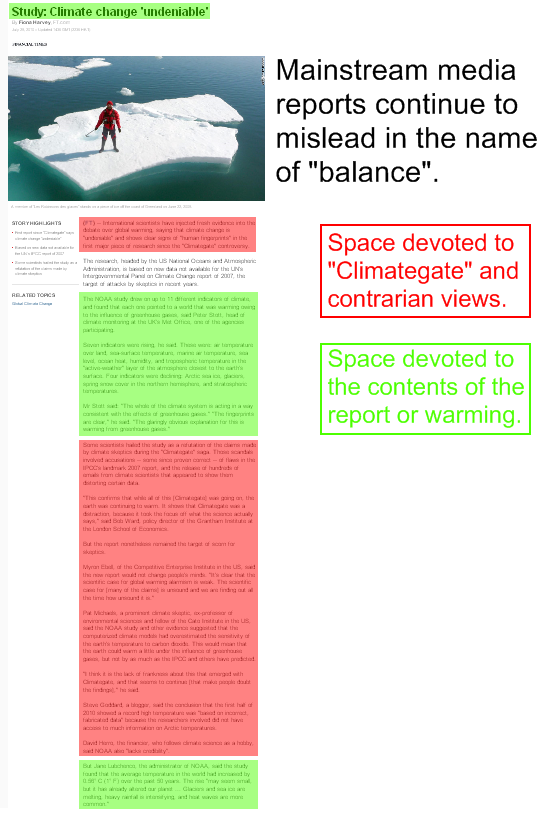 From time to time, journalists like Andy Revkin and Keith Kloor protest that the mainstream media doesn’t do an awful job covering the issue of climate change. They believe that the well-documented, systematic bias of undermining scientific conclusions by “balancing” them with contrarianism is behind us. Unfortunately, this is demonstrably false.

The above image is from the self-proclaimed “Most Trusted Name in News” CNN’s coverage of NOAA’s just-released 2009 State of the Climate Report, copy from The Financial Times. The State of the Climate report details how the planet is warming as captured by 11 different indices, from land surface temperature to glacial mass balance.

Thingsbreak has produced a graphic illustration of how lazy journalists mislead in the name of “balance”. On right is his colour coding of her story on the NOAA report on the State of the Climate in 2009, with red marking coverage of “Climategate” and contrarians and green marking coverage of the report that the story is ostensibly about. This, from the red coverage, quite takes your breath away:

Harvey’s story was so bad that even Keith Kloor said that it was “glaringly flawed”.

CNN must have noticed the criticism and acted on it. The article has now been REMOVED from its website! Another victory for honest reporting, as opposed to fake “balance” in reporting.

We’re sorry! This page is not available. Please visit the CNN homepage or use the search box below.