The History Channel is showing a series titled “Life After People”. It is the sequel to a two hour special that was broadcast on the same channel last year.

The assumption in all versions of this show is that humans disappear SUDDENLY, by some completely unknown and unexplained process, leaving all man-made structures to slowly decay and become overrun by wildlife and plants. Some Protestants claim a simular event will occur, called the Rapture, but it will only involve them, not humanity as a whole. Quite simply, this idea is completely unscientific and irrational.

Here’s another version of the same concept: 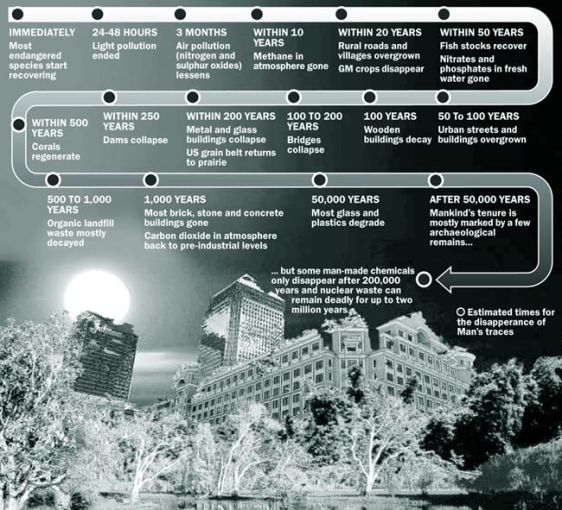 Let’s face it: While it may be fun to speculate what might happen to man-made structures after we are gone, it is pointless to do so while avoiding the real issue of what might cause humans to go extinct. Why are we so afraid to actually discuss this? It is a process that will take at least 100 years, involve massive death and suffering, and may be preventable. The History Channel is being profoundly irresponsible and cowardly NOT to discuss this in detail.

Besides, its not even history, is it?