Racism is normally thought of in America as whites hating blacks, but it is clear that members of any race can be bigoted against members of any other race. That’s clearly what we see here:  http://news.yahoo.com/blogs/lookout/beauty-pageant-winner-caught-ugly-controversy-150938019.html

A newly crowned beauty queen in Fiji, who sparked an outcry because of her mixed heritage, was asked to give up her title because of her age, not her race, according to pageant officials.

Torika Watters, 16, was chosen last month to represent Fiji in the Miss World contest. The pageant drew the likes of supermodel Rachel Hunter, who was a judge.

But after Watters won the title, she faced heavy backlash because of her mixed European/Fijian descent, and some said she did not look Fijian enough.

Hundreds of derogatory comments had to be deleted from the Miss World Fiji Facebook page, according to reports.

Watters had to step down because she did not meet the minimum age requirement of 17, Miss World Fiji pageant director Andhy Blake told the Fiji Times. Koini Vakaloloma, 24, the first runner-up, will take her place at the Miss World competition in Inner Mongolia in August.

Watters issued a statement saying that she had been approached by Blake to be in the contest and at the time expressed concerns about the age requirement. Blake told her she was still eligible. “I had no intentions of doing anything sneaky or wrong and like the other contestants entered the competition for what I believed to be the right reasons—to be an Ambassador for Fiji and raise money for charitable causes,” she wrote.

She went on to say: “I am proud of my identity as a Fijian and have never considered my people as racists.” She is not challenging the decision and has chosen to walk away.

Blake confirmed that he was under the impression Watters could compete, but was told later by organizers that contestants had to be at least one month away from turning 17 by the start of the pageant.

A posting on the Miss World Fiji 2012 Facebook site says, “Please be informed despite media reports—Miss Torika Watters was never stripped of her title. We wish her well in her future endeavors and offer an apology to her, her beautiful family and friends for any distress this competition would have brought upon her! She will always be the very 1st Miss World Fiji!!”

Watters is eligible next year for the pageant, according to Blake, if she chooses to compete again.

But I’d be willing to bet $1000 that she even if she does compete again, she will not win, because they will find another excuse to exclude her. Indeed, even if the pageant organizers are not guilty of being racist, they ARE guilty of discriminating against Watters because of her AGE, another thing she had no control over. And since she was allowed to compete in the first place, she should have been accepted, period. 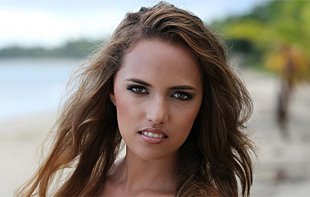 I would be proud to have this girl be Miss America, Fijian heritage and all!